November 26, 2012
One of my exciting and thrilling stays  so far happens to be in Vietnam. Along with my dear hubby,  I lived  few years in this wonderful and beautiful country, making my abode in Ho Chi Minh City or Saigon. It was a great experience for me living among unknown. I thought at the time of going there, that it would be like being in one of the corners of my own country, may be like going to eastern or north eastern regions, and so was not really prepared for surprises.

Though Vietnam is an Asian country, almost all of the living systems, whether the language - speech or script, mannerism or behaviour, life style, culture or  eating habits -  all are so different from India. I needed a lot of adjustments to live there. As a vegetarian I faced a lot of difficulty while going out to eat  in Vietnamese restaurants, but I tasted many different types of teas like jasmine,rose and cinnamon.
Vietnamese coffee is a unique beverage. Something I never tasted before in my life. I was so impressed by their unique way of serving coffee, I wanted to emulate it at my home, but with little success. We also found few Indian restaurants. So life was going smoothly....

One fine morning, one of my husband's colleagues introduced me to her Japanese friends,  Mrs.Yuki and Mr.Tomizova, a loving couple settled in Ho Chi Minh city. Tomizovas were running a small pottery studio and in one of the floors Mrs Yuki has arranged a small kitchen studio as well, where she used to run cookery  classes, especially for foreign nationals and tourists who visit Vietnam for a good spell. They take pottery/ cookery classes and they also invite some of their friends if they are interested to teach any of their own talents, say crafts, languages or any other special talents that are worth sharing!

I was thrilled to know them and to get exposed to the arts and crafts studio and soon i joined them to learn pottery! I spent long hours learning to make clay, churn the wheel, bake the items made and then also paint them intrinsically or otherwise.  I made some  beautiful cups,trays,diyas and mugs while having fun with few Japanese friends, Vietnamese neighbors and some even French and Singaporeans co students.

One day, as I was busy shaping a light green mug, Mr. Tomizova comes to me and asks whether i would be interested to introduce some  Indian recipes in the kitchen studio for their Japanese friends. It was a  surprise query, as they generally sued to keep their activities very closely held between both husband and wife, so asking a newcomer like me, that too coming from India, to share Indian Cuisine to their community was - on one side, intriguing and also another side exciting for me, as I never attempted such a task like demonstrating or telling others about how to make these dishes.  Doing it within the family or within close friends was so different from trying it out in a professional kitchen!.... Very hesitant inside, put a brave face and nodded to my master (he was my pottery teacher no!) accepting that invitation. As said, I was a bit nervous about the whole idea.

Mrs Yuki later told me that it would take a month or so, before they could organize a program on Indian cuisine, so i don't have to feel tense about it and do what i could do in a simple and relaxed way. That assurance made me become a little relaxed, still, I had to prepare in the right earnest.

After a few days, and after lot of small talk with my hubby and also with Mrs Yuki, I decided to make an adventure of making one of the greatest Indian  savouries, what we call Samosa and top it with some thing that my children always liked my making, a dessert called  Semolina Pudding.  I was confident that I could make both these in a delicious way, but the real challenge would be to do it as a demonstration-cum-instructive way of doing among so many of foreigners, whose language also i don't know.

In order to save myself and the guests from funny moments, I decided to give them print-outs of these two recipes while giving some short line drawings too. When I sent an email giving the details of what I intend to do, Tomizova became very excited. And immediately they announced a Lecture Demo Workshop of Indian cookery at their Studio and announced on their webpage inviting all Japanese and other expatriates living in Saigon to join them! He told me how he burnt his mouth while attempting to taste them for the first time during his visit to Delhi some years earlier. He also shared that he is a fan of Samosas himself and wanted to learn making them. What a surprise: a Japenese family in Vietnam, who like Indian Samosas!

Finally the day arrived and to give me moral support, my hubby said he would also come and be there with me at the Studio, while I do my first job as a "chef". Do I call myself a Chef or a demonstrator of Indian dishes? To my utter surprise 15 beautiful Japanese young ladies,  attended the program and were so forthcoming and  friendly. They were all very active cheerful, excited and bubbly in their enthusiasm  and were genuinely curious about Indian cooking. Most of them never tasted Indian cuisine before ..... except the hosts, who went on excitedly telling them stories of their Delhi culinary adventures. That made the whole afternoon a lively and tension free for me, as i went ahead and made dozens of Samosas and several cups of semolina pudding. At the end it was like a mega picnic, where we all had a party tasting and eating and making these two dishes several times, where almost each of my guests tried their hands in making the pyramids and turning them golden brown!!! The fun of the day was that each of my friends were so quizzical about how the pyramid shape is created and so, more than learning about the making of dough or making the aloo stuffing, they went on experimenting making the funnel with the rolled out dough sheets and lo, if i count the number of shapes we all made, they outnumbered al the clay shapes i made in the pottery classes till then.  However, no one was minding the real shapes but all crunching their way to polish each set that was removed from the frying pan, without any left to even take a photograph  at the end of it all.
I ended up becoming their regular studio member and spending few more weekends having parties of Indian snacks with my new found japanese gang of girls in  Saigonese bilanes, till i set sail back to India. 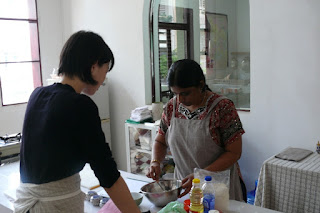 Me and Mrs Yuki arranging every thing for cookery class 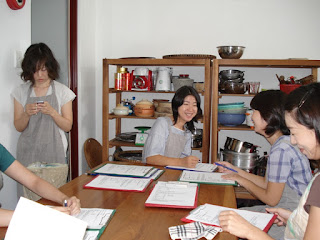 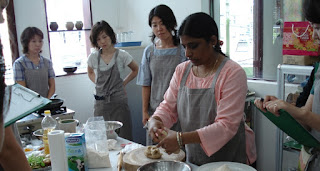 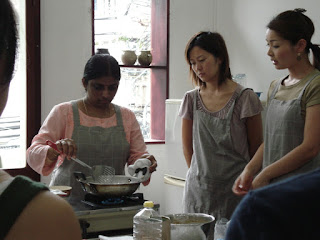 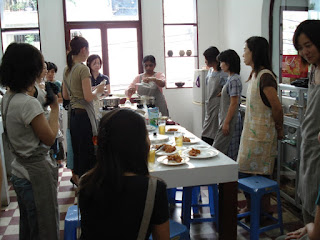 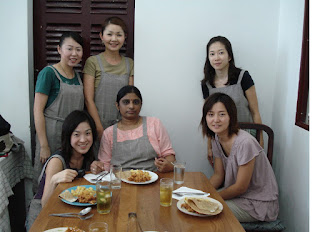 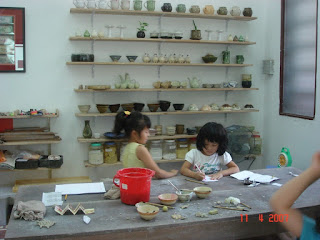 Kids are learning in   Pottery studio

Popular posts from this blog

"Kayam" A Special Recipe for a Special Occasion! 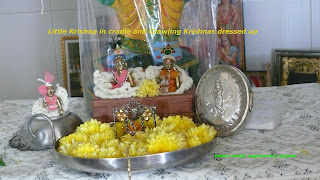 Sri Krishna Jayanthi / Janmashtami Greetings to all. Though for a majority of India, its a month late, some parts of India, that goes by solar calendar,  is celebrating Sri Krishna Janmashtami on 8th September 2012.  In Manipal, the city where I am living currently is also celebrating this festival in a grand manner this week along with its twin city, the Temple Town,  Udupi. Udupi is known world over for the  Temple of Lord Krishna.

As the entire region  is busy along with Udupi  for the celebrations of  birth day of Lord Krishna on the 8th/9th September, I visited  the temple, on the eve of the festival. As usual hundreds of flower vendors and fruit vendors descended and spread themselves across all main streets of the city busily selling them to the devotees and families for their festival preparations.  All families are busy decorating their homes, while devotees thronging the Temple are working through the night decorating it with flowers, colour full lighting and the entire are…
Read more 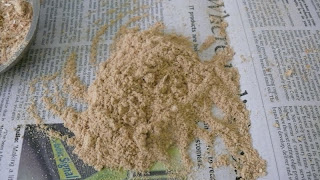 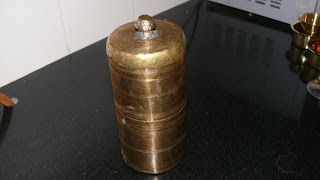 Filter Coffee
I like coffee since childhood. I learnt how to make Filter coffee from my mother.My husband also is coffee lover. So my coffee liking continues to influence my present home as well.

The filter coffee is made using an instrument called the coffee filter. The filter brews coffee into a fine dicoction. The coffee filter is made of two cups:(upper one fits onto the lower one.) 1. Upper cup is like a filter(with pierced base) for filtering out the brewed coffee. The upper cup usually comes with a lid and 2. Bottom cup to collect the decoction(brewed coffee)
Today i will show you how to make Indian filter coffee.
I have used a traditional brass coffee filter her…
Read more